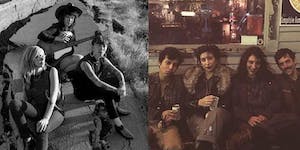 While songwriter Sarah Rose Janko was growing up waiting tables & watching blues and rock & roll bands in her Dad’s west coast bar, Jasmyn Wong was learning to drum to Riot grrrl records & dancing her way through the underground SF goth scene, and Hall McCann was in the Northeast practicing harmonies to old country classics & sneaking out of the house. They each went on to live in different cities, find friends & temporary homes, travel long distances for love, learn about heartbreak, and eventually land in Oakland, CA, where the tough, lonesome sound of Dawn Riding was born.

Though they grew up in separate realities, the ladies of Dawn Riding were all raised by the unapologetic, inclusive, gritty culture of the underground. It’s one of the only ways to explain how they’re a tough-as-nails country-folk trio who are indisputably more punk rock than Americana, and more southern gothic than country. Together they invoke the dark honesty of Lucinda Williams, the close harmonies of the Everly Brothers, and the hypnotic, dreamy overtones of Mazzy Star – a formidable soundtrack to long nights of slow dancing, and true stories of unknown legends. They make music for their friends, their lovers, and the unyielding spirit of the underdog.