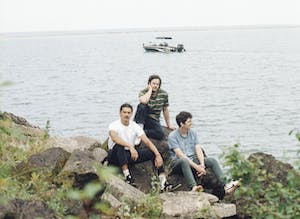 iCal
Google
Deeper is a Chicago based Indie/Post-Punk band.

Deeper’s Origins date back to 2014 when prior to releasing any material an abrupt line-up change left the Chicago based band looking for a new direction. Singer and guitarist Nic Gohl along with drummer Shiraz Bhatti threw out all of their old songs and brought on bassist Drew McBride to round out the lineup. The subsequent demos leaned on intricate guitar interplay, direct “of the times” vocals and a spirit that speaks to the band’s collective place in this pit of endless internet.

Deeper honed their sound over the course of 2015 & 16’ in basements, lofts, and anywhere that would have them. Touring the demos and landing at a fully realized inflection point. Call it Post-Punk, call it Indie Rock, it’s a record that steps in and out of boxes filtered through an unmistakable midwestern lens.

As social norms and political ideologies distort, writing and creating art was the only way to control the growing voice in the band’s collective head. The conceptualizing of the album started and stopped over that two year time warp culminating in a few feverish tracking sessions in late 2017. What was left is a stark shimmering portrait of a modern American experience.