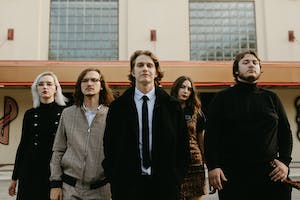 B.D. And The Sheeks, Lindsey Candler

BD and the Sheeks - https://bdandthesheeks.com

like the beginning of most humble rock stories, flipturn came to be in a garage in fernandina beach, florida. the place where five seemingly inevitable friends congregated to kill the extra hours of the high school years, produced a sound that flirts with the countless tangents that build up modern indie music. although their genesis shares similarities to that of many other bands, their sound, raw magnetism and steep trajectory are unmatched by anyone among their ranks.

the flipturn roll call is dillon basse (lead vocals/rhythm guitar), tristan duncan (lead guitar), madeline jarman (bass), taylor allen (synth) and adrian walker (drums). fans are drawn to the rarity of both strong female and male presences within the band that foster a sense of inclusion in the musical experience. the fever dream energy of their live shows has positioned flipturn as a metaphorical musical sun, holding fans in a trancelike orbit.

there is nothing held back while the band is performing. basse’s vocals possess the innate ability to simultaneously shake the physical walls of a room and shake loose latent emotions within a listener. the chemistry and talent shared between the bandmates allows for a total release of inhibitions. their songs are written in an artfully understandable way that makes flipturn the storytellers for a generation of people who were never told what to do next.

in their short yet accomplished history, the band has collected an impressive number of streams, built an online community of supporters, and shared the stage with other acts who are reshaping the industry. flipturn has recently spent a significant amount of time touring and plan to travel even more in the coming months. the music they are in the process of releasing holds a sincerity and transparency unlike anything that has come before.

About BD and the Sheeks

“(Their) Performance is a wake-up kick in the face. (Which is to say, it was great.)” KEXP

BD+theSheeks are a band that are constantly evolving. On June 14th 2017 they released their long awaited 2nd Album “1, 2 AND A 3” featuring popular Psych-Synth Songs from the past 2 years plus a whole new feel with their singles “No One Else” and “What have I done”. Fans of the band enjoyed their driving beats, synth groove and howling vocals from front man Branden Daniel. A big change since their debut Album “Keep Em Flying” in 2012 with it’s raw-garage Rock n’ Roll style. This new album sets a drastic contrast for the band’s sound.

Five years ago their debut Album Keep Em Flying moved Audiences with Garage Rock hammers and were voted 2013 Top Ten bands on SiriusXM’s Underground Garage. In 2015 BD & the Chics released a 7” titled “In Light” which not only debuted their new dynamic sound but brought more success to the band then they’d ever experienced before. In Light was picked up by KEXP, Chicago’s Fearless radio, multiple College Radio stations nationwide, SiriusXM and even Tokyo’s InterFM. MtvU put the “In Light” Music Video on Heavy Rotation in 2015. Massive press and articles on the band followed including a feature Article in the Huffington Post, along with a Licensing and Soundtrack placement in the 2015 Miramax Film “Ditch Party”. A fiery frenzy has just begun for this Original band and their new direction.

Experimenting with bassist and multi-instrumentalist Nate Kruz playing Keys and Branden Daniel switching from Guitar to Bass. The band found a new sound with a new appeal that was evident to the group from their Live Audience’s excitement. Knowing they needed these songs on Vinyl immediately, they went to Seattle’s Litho Studios with Producer Tom Biller (Karen O, Kate Nash, Elliott Smith) and recorded using Analogue tape. The result is a dreamy combination of spacey ease, Sabbath like attack and a charming Bowie like delivery.