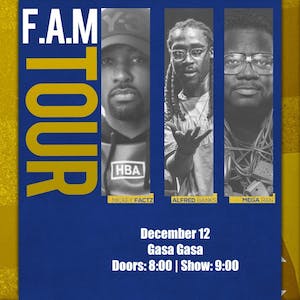 not seen since Tech N9ne,” they meant it. A former teacher, Mega Ran (formerly

The frst ever rap artist to be licensed by a major game developer (CAPCOM), Ran

takes the old and makes it new through his unique form of music he calls “Chip-Hop.”

engagements, world tours, tons of convention and festival performances, and a

legion of smart fans, patiently awaiting his next move.

decide whether their art should be a hobby or a way of life. When it came time for

Bronx native Mickey Factz to decide what his art meant to him, he chose music,

In 2010, Factz signed a major record label deal with Battery Records, a subsidiary of

Jive Records and released his critically acclaimed mixtape I’m Better Than You.

Following the release of I’m Better Than You, he released his single For The Culture

Following the success of Mickey MauSe, Factz had the opportunity to be the opening

After the tour, Mickey took a brief hiatus from the entertainment industry. He

After years of prepping, Factz released his debut album, The Achievement, in 2016 to

rave reviews. The project was solely produced by super-producer Nottz and peaked at

No. 9 on iTunes Hip Hop charts. He returned to the road in 2018, touring with West

an EP titled Enigma and his sophomore album titled One Above All.

Mickey Factz is the true embodiment of artistry. In addition to his solo work, Factz has

worked with some of the most influential artists in music, including Drake, B.o.B., The

Cool Kids, Travis McCoy, and Hip-Hop pioneers like Afrika Bambaataa. His body of

work stands as homage to the culture while awash in today’s spirit of innovation.

He is The Achievement.