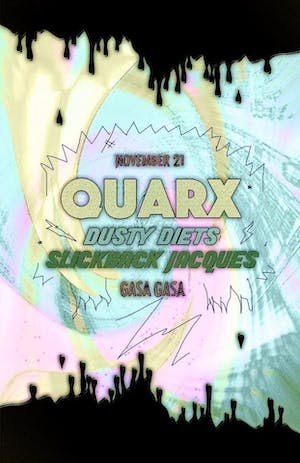 Composed of Alaric Fricke (vocals and rhythm guitar), Keagan Soto (lead guitar), Thomas Vercher (drums), and Jonathan Zeringue (bass guitar), Quarx was born in the swamps of Baton Rouge in 2017 as a product of Fricke's songwriting. Each member of Quarx brings their own unique musical influences and diverse experience to produce a sound that they describe as "Wholesale Rock-n-Roll". From Progressive and Southern Rock to Blues and Funk, Quarx's melting pot of influences allows their music to have a taste of something for everyone.

The band focuses on each member receiving creative freedom and equal input, which allows the group songwriting process to become as complex or as simple as the story trying to be told. While strong songwriting helps define the band, Quarx shines the most during their live performances. Playing on bills with bands such as CBDB and The Iceman Special and playing in prominent venues such as Baton Rouge's Varsity Theatre and New Orleans' Howlin' Wolf, the band is no stranger to captivating crowds with their live sets. Improvisation, raw energy, and rotating setlists set the stage for twists and turns each show.

Slickback Jacques & the Lucid Blues was born out of house parties during Carnival season in New Orleans, LA. The quintet's first show was in the Marigny for a Krewe du Vieux afterparty, and was swiftly followed by another post-parade show. Following these Mardi Gras experiences were shows at local venues around New Orleans culminating in a wild pre-summer set at the Drifter.

SBJ then went on hiatus for the summer as members traveled as far and wide as Israel and as nearby as the one and only Bastrop, Texas(including multiple stops at Buccee's). Back together and once again featuring some sax thanks to Jordan Peota, the band has been writing new material, playing around town, and having some wild lucid dreams during this wonderful fall and winter season.

from both Chicago and New Orleans to create something that at once sounds both fresh and timeless. Dusty Diets (Dietsche’s stage name) has created a debut solo album that highlights classic electric blues traditions alongside elements of rock & roll to create a fuzzed-out, Southern gothic album in the tradition of early Kings of Leon, Gary Clark, Jr., Moreland & Arbuckle, and The Black Keys with nods to the classic sounds of Paul Butterfield’s Blues band, Freddie King, and Magic Sam.

Playing alongside Dietsche is the Texas-raised harmonica player Sean Deskin. The duo met in New Orleans and compliment each other’s playing in their respective blues dialects. Although backed by a heavy-hitting funk-infused rhythm section, Diets’ guitar/harmonica soloing steers the album’s vision toward a slightly different path, honoring the great sounds of the past while offering a new take on the present.