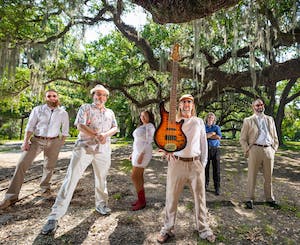 Sam Price & the True Believers seeks to celebrate life and empower peace through music, love and simple human kindness, while also speaking truth to power and encouraging everyone to stand up and move!

Float Like a Buffalo is a Denver-based 7-piece, 9-instrument, high-energy Funk Rock band. We love to get our crowds dancing with songs inspired by our home in Colorado, being on the road, and finding ourselves.

The band has become a local funk sensation over the past four years, playing shows at major Colorado venues like Red Rocks, The Bluebird Theater, Gothic Theatre, Levitt Pavilion, and Marquis Theater – and taking the crown for Best Funk Band in Denver in Westword’s 2019 Music Awards.

In early 2019, Float Like a Buffalo released their freshman full-length album, 'Back From Nowhere' at a near-sold-out release party at the historic Gothic Theatre. The band followed this rocket start to the year with shows at Red Rocks (Local Set), The Marquis Theater, Levitt Pavillion, and Westword Music Showcase. In the summer of 2019, Float Like a Buffalo made their debut on the Red Rocks Main Stage as an opener for Face Vocal Band. They also received the award for Best Funk Band from Denver Westword and were listed among the Top 30 Rock Bands in Denver by 303 Magazine. In August 2019, Float Like a Buffalo released their new single, Gone By Morning, and the Music Video to go with it, at a packed party at The Gothic Theatre.

Following that, they had the opportunity to play directly ahead of Sting at the Jazz Aspen Snowmass Labor Day Experience (sold out) and to open for Big Sam's Funky Nation and Dragon Smoke (feat. members of Galactic and Dumpstaphunk).

Starting 2020 off strong, Float Like a Buffalo debuted their new single “So Damn Cold” at the historic Bluebird Theatre in Denver, which sold out. Looking towards the rest of the year, the band has performances lined up at several major festivals and theaters around Colorado and the surrounding states, announced a national tour, and their sophomore album already in the back of their minds. Their song, “The Day,” off of their album, “Back From Nowhere,” was featured in 303 Magazine’s “New Music You Should Know - February 2019." Their music video for "Gone By Morning" was premiered by 303 Magazine in August.

Retrofit was birthed in the heart of Mid City, New Orleans when four ambitious local musicians decided to further their careers and immerse themselves in everything soul. Inspired by the rhythmic nature of the Big Easy along with the rich musical heritage of the south Louisiana region, the boys simply had to open their ears to let in the music that has inspired their signature sound. With roots in Blues, Gospel, R&B, Afrobeat, Funk, and all forms of Soul music, Retrofit seeks to create sound waves to revive the spirits of its audience.

The group started by making a one night trip to Pensacola, Florida to play an opening slot for a friends band in the area. After enjoying the set and coming together as a group, they couldn't resist but to make it official. According to them the biggest reason being the unique chemistry the band conjured up from day one. "With some groups, you can just feel it...like there is something in the air when you step into the rehearsal space or on the stage. Something greater than the self," describes keyboardist and vocalist Christopher DiBenedetto.

Today, Retrofit plays locally around their hometown in New Orleans, while continuing to tour the southern region.Set to release their debut EP on December 16th of 2017, the quartet is beyond thrilled to spread the same love they've received from the city that has inspired them so much. Find them on social media or going the mailing list on the home page for current news on the band.