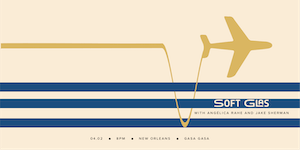 Brooklyn based producer & songwriter Joao Gonzalez (Soft Glas) is a multi-instrumentalist who explores music-making as emotional & spiritual therapy. A prolific arranger of experimental soul & NuJazz, the producer is often aided in his productions by an excellent cast of contributors & collaborators whose voices and performances lend an organic element to the sonic landscape. This includes the likes of Lido, Mulherin, Sunni Colon, Chargaux, and Jessie Boykins III with musical influences ranging from his father Gonzalo Rubalcaba (Grammy Award-winning Afro-Cuban jazz pianist and composer) to Radiohead, Debussy, Tyler the Creator and beyond.

ANGÉLICA RAHE (pronounced “ray”) has a musical journey that spans the globe. In 2018, she toured across the U.S., Europe and Latin America with Columbian-American R&B sensation, Kali Uchis, as her musical director, guitarist and backup vocalist (including a North America run opening for Lana Del Rey).

In an era where naked integrity is at a premium, Jake Sherman reminds us that, no matter who you are, the sexiest thing you can do is to be yourself. Perhaps Jake doesn't need to "get sexy," as he has been sexy all along, as those of you who have been paying attention to his performance schedule would know. Following the release of 2017's Jake Sherman Returns, Jake toured and/or recorded with Bilal, Meshell Ndegeocello, Emily King, Blood Orange, Benny Sings, Andrew Bird, Gabriel Garzon Montano, Nick Hakim, and gospel heavyweight Doobie Powell, with whom he co-wrote and -produced "Close to You,” on Powell's latest release. Wherever he was in the world, odds are he was in front of an organ, and hard at work on what would become this, his third album.