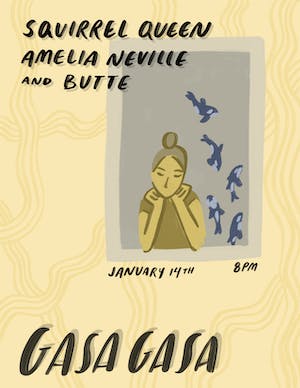 Lydia Kolda (aka Squirrel Queen) is a singer songwriter living in New Orleans. Originally from Austin TX, she was deeply influenced by the live music and festival scene with which she grew up. She first picked up a guitar at 11 and immediately began writing songs. In high school, she recorded an album titled Green and Tan, featuring songs about every crush she had ever had, leaving no secret untold. Singing her songs at school events and fine arts conferences was when she discovered how much she and her audiences really enjoyed connecting through loud and unfiltered admissions of emotion.

After she moved to New Orleans to study the music industry at Loyola University in 2012, Kolda was given the title Squirrel Queen because she could often be found at Audubon Park enticing the squirrels to eat out of her hands. She then formed a band with the same name and released an album self titled Squirrel Queen (2014), followed by "I Used to Shoot Guns" EP (2015), and "Coming Home" EP (2016). She graduated from Loyola University in 2016, and in the same year lost a good friend and bandmate to suicide, ultimately causing her to quit playing because music had become so intertwined with pain and grief.

In 2019, after three years believing she had given up playing music, Squirrel Queen recorded and released the single, “Irrational." It is the opening track to her upcoming EP, "Life and Death and In Between.” The EP (set for release in 2020) deals with the struggles of loss, healing, and emotional uncertainty. The writing and recording of this collection of songs has been an exercise in moving forward and is a rebirth back into music for Squirrel Queen.

You can listen to "Irrational" on any major streaming service.